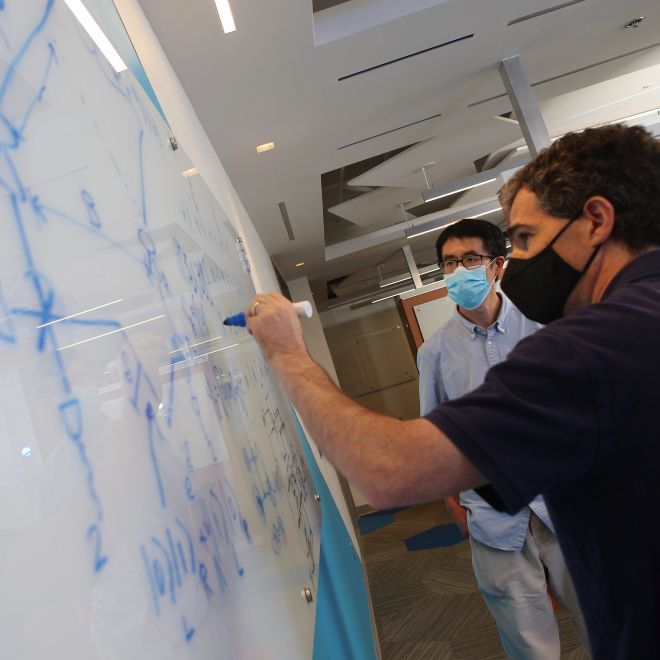 The Joint Center for Quantum Information and Computer Science (QuICS)—a research powerhouse focused on quantum computation, quantum communication and quantum cryptography—recently received a renewal of federal funding from the National Institute of Standards and Technology (NIST).

The interdisciplinary center, launched in 2014 as a partnership between the University of Maryland and NIST, is expected to receive up to $12.2 million over the next five years. The funding will sustain and advance the mission of QuICS, with UMD faculty members in computer science and physics working side-by-side with NIST scientists on theoretical and experimental research involving quantum algorithms, quantum complexity theory, quantum cryptography, quantum error correction and more.

“We’re excited about the promise of a world where quantum computers and other quantum technologies are able to achieve significant breakthroughs in many areas of science and industry, ranging from materials science to cybersecurity,” said Ronald Boisvert, chief of the Applied and Computational Mathematics Division of the Information Technology Laboratory at NIST. “We believe these types of partnerships—federal agencies working closely with academia—will provide the scientific knowledge and skill sets to make that happen.”

With its renewed financial support from NIST and UMD, QuICS expects to grow its research agenda to address emerging topics like quantum computer architectures, quantum software stacks, characterization and benchmarking of complex quantum devices, and quantum algorithms for quantum chemistry.

The center also plans to significantly expand its human resources. Recent renovations to the QuICS space on the UMD campus doubled the physical size of the center. There are plans to hire additional QuICS Fellows—a combination of UMD faculty and federal scientists from NIST embedded on UMD’s campus—as well as more postdoctoral scholars, graduate students and support staff.

“While we continue to grow in size, we believe the close-knit collaboration we have amongst our research community will remain vibrant and productive,” said Yi-Kai Liu, a NIST scientist and co-director of QuICS. “It will take a broad scope of scientific skills, brought by a diverse group of people, to advance our ambitious research agenda. We have the talent to get there.”

Since its inception, QuICS has been actively bridging the gap between quantum information and computer science—widely believed to be crucial for the future development of quantum computers.

The center’s research revolves around four thematic questions: how does quantum mechanics inform the theory of computation and communication; what insight does classical computer science give into quantum computing; what are the consequences of quantum information theory for fundamental physics; and how can theoretical advances in quantum information processing be applied?

QuICS researchers have published roughly 480 papers on these topics in leading academic conferences and journals highlighting both physics and computer science, including Nature, Science, Proceedings of the National Academy of Sciences, Nature Physics, Physical Review Letters, the ACM Symposium on Theory of Computing, and the IEEE Symposium on Foundations of Computer Science. QuICS research has also been regularly presented at the annual Conference on Quantum Information Processing, the leading conference in the field.

In addition, QuICS runs an active seminar series and visitor program, which brings distinguished researchers to the UMD campus to give a seminar and have in-depth scientific discussions with QuICS faculty, postdocs and students.

QuICS is currently home to 14 active Fellows and about 20 postdoctoral scholars. Some of the postdocs were engaged through the center’s Hartree Postdoctoral Fellowship program, which recruits talented recent doctoral graduates interested in quantum information science to work at UMD for up to three years.

“We have a strong sense of community at QuICS. Our Fellows collaborate not only on research, but in helping set the agenda for the center through activities such as selecting postdoctoral and graduate fellows, coordinating our seminar series, teaching quantum information courses, and organizing conferences and workshops,” said Andrew Childs, a UMD professor of computer science and co-director of QuICS.

Some of the major conferences and workshops that QuICS has hosted include:

• A workshop in 2016 focused on a connection between quantum entanglement—the bizarre feature of microscopic physics that can link two widely separated atoms or electrons—and computational complexity theory.

• The 6th International Conference on Quantum Cryptography, known colloquially as QCrypt. Quantum cryptography aims to achieve security from fundamental physical principles, such as the quantum mechanical phenomena of entanglement and Heisenberg’s uncertainty principle.

• The 4th International Conference on Quantum Error Correction (QEC17), the world’s premier scientific meeting focused on the protection of quantum computers from their hostile surroundings.

• A workshop in 2018 discussed the emerging field of quantum machine learning, a discipline that seeks to wed the promise of quantum computing with tools and techniques that help ordinary computers learn from data.

• The 2019 TQC+NISQ meeting attracted more than 250 scientists and students from around the world involved in quantum computer science and quantum physics.

• A daylong research symposium in 2020 that celebrated the center’s five-year anniversary and explored the future of quantum information science.

The QuICS funding renewal comes on the heels of several other major announcements regarding quantum research and innovation at UMD. This includes the launch of a $25 million National Science Foundation Quantum Leap Challenge Institute for Robust Quantum Simulation, the establishment of a quantum business incubator and the addition of noted quantum error correction theorist Daniel Gottesman to the UMD computer science faculty.

“Working closely with our federal partners, other academic institutions and private industry, we’ve made a concerted effort to establish the University of Maryland as an epicenter for significant advances in quantum information science, computing, sensing and networking,” said Amitabh Varshney, UMD’s interim vice president for research and dean of the College of Computer, Mathematical, and Natural Sciences. “Our society is at the cusp of benefiting from profound changes thanks to quantum science and technology, and the University of Maryland will play a pivotal role in driving that change.”