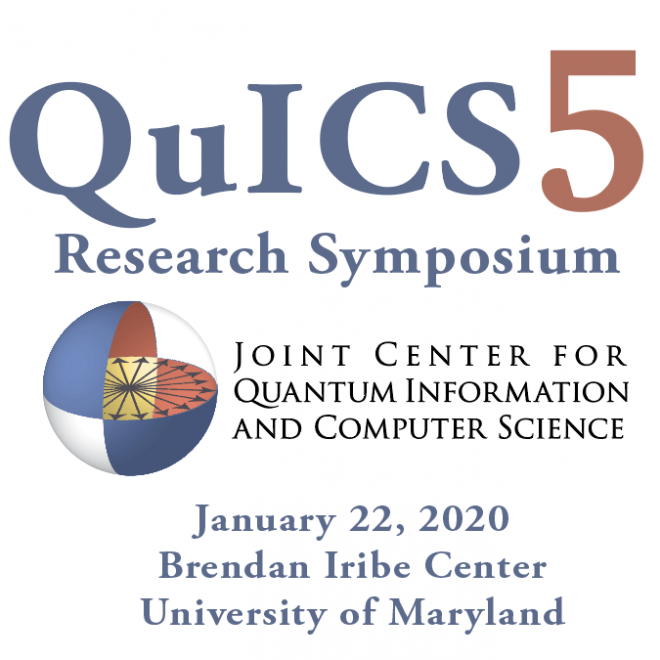 The Joint Center for Quantum Information and Computer Science (QuICS) recently celebrated its fifth anniversary with a daylong research symposium, ushering in its next five years with a series of talks and presentations by students, postdocs and faculty who were joined by quantum experts from across the region and beyond.

“QuICS has become established as one of the world’s leading centers for quantum computing research,” said John Preskill, the Richard P. Feynman Professor of Theoretical Physics at Caltech, during his talk that kicked off the January 22 event. “You have a lot of accomplishments to be proud of in the first five years, and I have very high expectations for the next five years and beyond.”

In addition to Preskill, leading quantum information scientists Barbara Terhal, a professor at TU Delft and a researcher at QUTech in the Netherlands, and Eddie Farhi, a principal scientist at Google, also spoke. Several QuICS alumni who now work in academia and industry returned to present new research—and to wish QuICS a happy birthday.

“The returning postdocs and graduate students are a testament to the success QuICS has had in recruiting and training the next generation of researchers who will tackle hard problems in quantum information and computer science,” said Andrew Childs, a professor of computer science and a co-director of QuICS. “We’re very proud of their accomplishments.”

Since its inception, QuICS has connected scientists who share the goal of developing a deeper understanding of the capabilities of information processing devices built upon the rules of quantum physics. With the passage of the National Quantum Initiative Act in late 2018 and news that Google built a computing device demonstrating a compelling quantum advantage, there is currently strong support and impetus for researchers seeking to clarify the boundaries between conventional and quantum information processing.

Central to the symposium schedule was a panel discussion moderated by outgoing QuICS co-director and founder Jake Taylor, who is also the assistant director for quantum information science at the White House Office of Science and Technology Policy. The panel included Preskill, Terhal and Farhi, as well as Ronald Boisvert, head of the Applied and Computational Mathematics Division of the Information Technology Laboratory at the National Institute of Standards and Technology (NIST), Robert Cunningham, chief of the Laboratory for Physical Sciences, and Laurie Locascio, UMD’s vice president for research.

Taylor invited the panelists to share their insights into the future of quantum computer science and reflect on new opportunities for QuICS going forward. A consensus emerged around the idea that quantum science is becoming increasingly interdisciplinary and that QuICS is well-positioned to connect computer scientists, physicists and engineers to discover new applications for near-term quantum devices and solve the harder problem of getting large quantum devices to tolerate their inevitable faults.

“We started QuICS to ensure that the dialogue between computer science and physics can enable the future of quantum information science,” Taylor said. “The panel’s fluid engagement across boundaries and advice about both future directions and means of engaging students for the future give me great hope.”

The afternoon program included talks by Shelby Kimmel, an assistant professor of computer science at Middlebury College, and Julien Ross, an assistant professor of mathematics and statistics at Dalhousie University. Both Kimmel and Ross are former QuICS Hartree Postdoctoral Fellows. Michael Jarret, who finished his doctoral degree at QuICS in 2016 and is now a research scientist at Booz Allen Hamilton, also presented a talk.

Yi-Kai Liu, a computer scientist at NIST and the incoming QuICS co-director, closed out the symposium by looking toward the next five years of contributions from the center. “We have ambitious plans for QuICS, including expanded research efforts on quantum error correction and quantum computer architectures, as well as education and industry engagement,” Liu said. “I think everyone is intensely curious what we’ll discover in the coming years.”