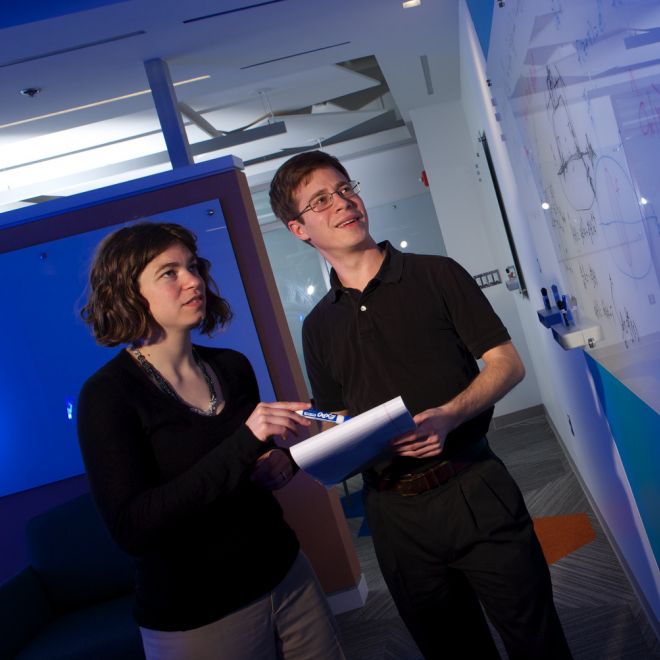 The Joint Center for Quantum Information and Computer Science (QuICS) celebrates its five-year anniversary at the end of October. The center—a partnership between the University of Maryland and the National Institute of Standards and Technology (NIST)—has more than two dozen faculty and postdoctoral researchers that explore a breadth of topics at the intersection of quantum computer science and quantum information theory.

A significant part of the scientific expertise at QuICS comes from the Hartree Postdoctoral Fellowship program, which recruits talented postdocs interested in quantum information science to work at UMD for up to three years.

“Our goal is to attract outstanding young quantum information researchers to the center and give them the resources to pursue an independent research agenda,” says Andrew Childs, professor of computer science and co-director of QuICS. “They are not attached to one particular research group within QuICS—we instead encourage them to chart their own courses and to collaborate widely across the center.”

The fellowship is named for Douglas Hartree, a scientist at NIST in the mid-1900s who made substantial contributions to physics and computer science.

Childs says the program has been extremely successful since its launch in early 2015, and that its alumni have gone on to prestigious positions at other institutions. Of the 10 postdocs named as Hartree Fellows, four are now in tenure-track faculty positions, two have joined leading industry research groups, and one develops software at Google. The remaining three are currently at QuICS.

“We’re proud that our Hartree alumni have produced significant research results and have become influential researchers in the field,” Childs adds.

Shelby Kimmel (left in photo), an assistant professor of computer science at Middlebury College, was one of the first Hartree Fellows. She says the fellowship gave her the flexibility to expand her research in new directions, while also broadening her network of collaborators—both with faculty and students in QuICS, as well as with numerous visiting researchers.

“I found QuICS to be an intellectually vibrant place,” Kimmel says. “People there were more than willing to cross the traditional boundaries of physics, computer science and math in order to work on interesting problems, and this led to a lot of shared learning and collaboration.”

Current Hartree Fellow Amir Kalev joined the QuICS community in 2017 from the Technion-Israel Institute of Technology. Kalev studies quantum measurement theory and quantum tomography, a procedure for reconstructing a quantum state by taking many measurements. He’s interested in applying these tools to the validation of quantum systems to ensure that they are behaving as intended.

Kalev says that talking with others in QuICS and collaborating with experimentalists at the adjacent Joint Quantum Institute allows him to better conceptualize how his work in quantum tomography can be used on new problems. “I’m very happy to be here,” he says. “This is a strong scientific community that offers many viewpoints.”

Aarthi Sundaram is also a current Hartree Fellow. Her research interests span both classical and quantum complexity theory. In a recent paper, Sundaram, working with others, investigates the quantum learnability of constant-depth classical circuits. The research, which establishes connections between quantum machine learning and quantum-secure cryptographic primitives, shows that quantum resources do not necessarily give an exponential improvement in learning certain neural networks.

She says she enjoys working with the many experts at QuICS.

“As an early stage researcher, you want to be exposed to as many new ideas as you can,” Sundaram says. “You gain more exposure, more knowledge and maybe you get better ideas for your own problems.”