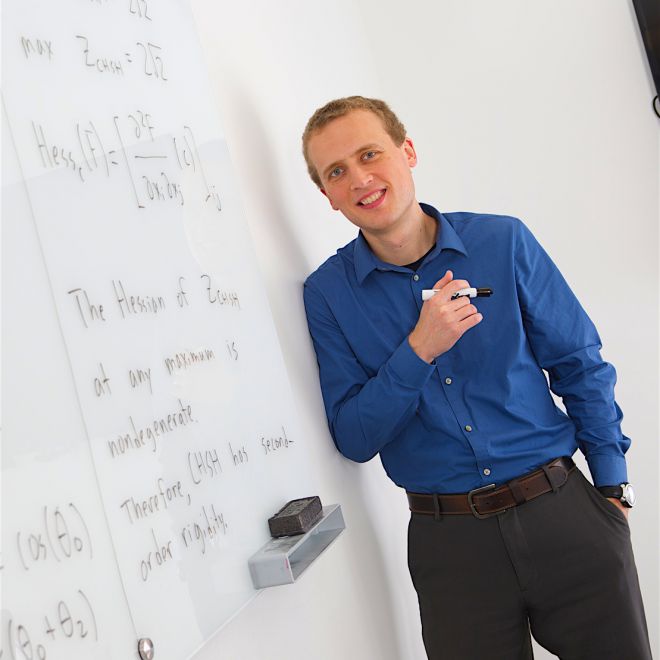 Carl Miller, the newest Fellow of the Joint Center for Quantum Information and Computer Science (QuICS) and a mathematician in the Computer Security Division of the National Institute of Standards and Technology (NIST), has cultivated a lifelong passion for mathematics. But it’s only recently that he’s turned his attention to the puzzles of quantum information, the blossoming field that brings quantum physics, computer science and mathematics to bear on the problems of digital security and the future of computation. Among other topics, he now studies how to generate random numbers—the basic building blocks of online security—in safer, more robust ways by harnessing the exotic effects of quantum physics.

Miller’s arrival at QuICS lands him near to where his fascination with math began. In his teens, he attended Montgomery Blair High School—a school less than seven miles from the University of Maryland campus.

“At the time, I was very into math puzzles and math problems,” he says, also recalling how teachers and students at the school frequently talked about math competitions.

He joined five other American high school students, who together travelled to Mumbai, India and competed as a team against more than 400 other bright young mathematicians.

“I enjoyed that experience a lot,” he says. “It was the start of getting connected to the wider math community.”

Miller went on to study math as an undergraduate at Duke University and continued on to the University of California, Berkeley for his Ph.D. In graduate school, he focused on algebraic geometry, a branch of math that involves grappling with abstract shapes and spaces—often requiring deft feats of mental visualization. After graduating in 2007, he moved on to a postdoctoral position at the University of Michigan.

Around that time, Miller began reflecting on how he might use math as a tool to tackle problems in other disciplines, especially those where a facility for abstract visualization could come in handy. “I thought about the topics I was most interested in, and the one highest on my list was quantum computing,” he says. “I had heard of that, and I thought it was pretty cool.”

Miller began talking with Yaoyun Shi, a computer scientist at Michigan, who gave him a paper to read. The paper—co-authored by QuICS colleague Christopher Monroe—was about using the laws of quantum physics to generate random numbers from devices that couldn’t be trusted.

“I remember when Yaoyun told me about it,” Miller recalls. “At first I thought I couldn't have understood it right, because it didn't really make sense to me. How can you generate secure random numbers from devices you don’t trust?”

Random numbers are the lifeblood of modern digital security. Our computers and phones are constantly creating them to help secure online transactions. And that security requires us to trust that a nefarious company or government hasn’t tampered with the software or hardware in our devices. If the random numbers look random but are known to a third party, our online transactions become vulnerable to eavesdropping.

A key insight from quantum information is that entanglement—a special connection that exists only between quantum particles—can patch this security hole, allowing entangled particles to seed the creation of random numbers. That’s because a pair of entangled quantum particles are monogamous: Any fraternizing with a third quantum system degrades the relationship between the original entangled pair. This provides a way to check that no one is listening in and certify that fact with the stunningly accurate rules of quantum physics.

But it’s challenging to prove, mathematically, that no information leaks out by producing random numbers this way, especially when a potential eavesdropper has a powerful quantum computer. For years, Shi and Miller worked to strengthen results from the early paper by Monroe and other papers that followed. Research they presented in 2014 and published in 2016 provided the first proof that a realistic untrusted device—one that is both untrusted and imperfect—can securely generate random numbers. That mathematical fact required a hefty 70 pages to establish.

“Carl's work on device-independent random number generation was a real breakthrough,” says Andrew Childs, professor of computer science and co-director of QuICS. “He is one of the leading experts in this area, so he brings crucial expertise to QuICS."

Miller also brings this expertise to NIST, where he has found a natural home among the federal agency’s cybersecurity researchers. There, he will contribute to the Randomness Beacon project, which provides a steady stream of random numbers through a publicly accessible online interface. Eventually, he says, the team hopes those numbers can come from a source of entangled quantum particles. For now, though, they use off-the-shelf devices.

Miller, who is also an adjunct assistant professor in the University of Maryland Institute for Advanced Computer Studies (UMIACS) and an affiliate faculty in the mathematics department, says he would like to teach courses at Maryland on quantum information or mathematics. He looks forward to advising graduate students, too, especially those with a mathematical bent who share his affinity for solving puzzles.

“It’s a good field for people with mathematical skill,” he says, “and a lot of these puzzles arise from information processing problems.”

QuICS is a partnership between the University of Maryland and NIST. It is one of 16 centers and labs in UMIACS.