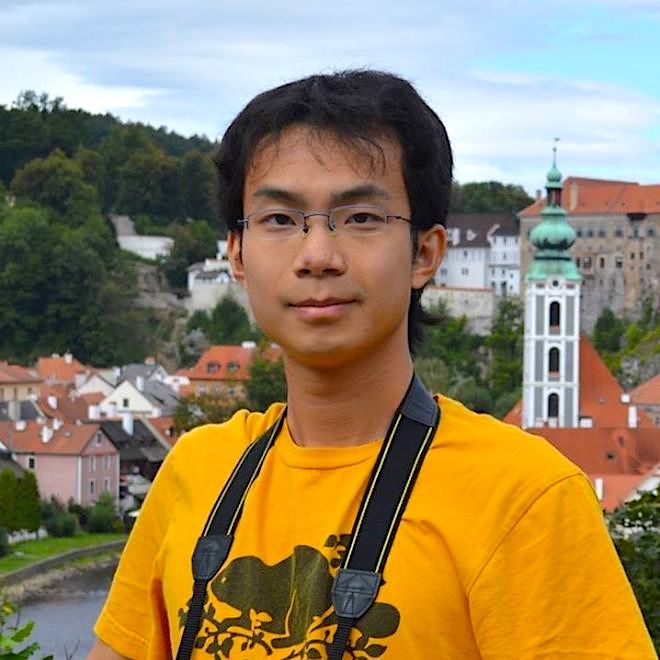 Space and time seem like bedrock scientific principles, providing the unmoving stage on which the drama of the universe unfolds. But physicists have known for more than a century that things aren’t quite so simple. For one, matter and energy dynamically warp space and time, modifying the stage to create the force we know as gravity. And more recent discoveries suggest that there is much left to understand about the relationship between space, time and quantum physics—the rules that run the realm of the very small.

Charles Cao, one of two recently arrived Hartree Postdoctoral Fellows in the Joint Center for Quantum Information and Computer Science (QuICS), is tackling this particular frontier of physics head on, working out the variety of ways in which aspects of space and time can emerge from the quirks of the quantum world.

A son and grandson of aerospace engineers and physicists, Cao grew up with an early love for science and especially astronomy.

“I liked to look at the stars and build and launch these toy rockets and whatnot,” Cao says. “That was sort of the gateway to physics for me.”

As an undergraduate student at the University of British Columbia, he worked with a group studying identity-swapping neutrinos—ghostly particles produced in stupendous numbers by nuclear reactions in stars and here on Earth—as well as a theoretical physicist working on high-energy phenomenology. But as he prepared to head to graduate school, he began to ponder his own ambitious questions.

From his coursework, Cao was familiar with a mathematical trick known as the Wick rotation, which was useful for solving certain quantum physics problems. But the same trick also suggested a tantalizing connection between time and temperature that Cao didn’t totally understand.

When Cao arrived at the California Institute of Technology for graduate school in 2013, he quickly linked up with others who were interested in the same ideas. Together with students, postdocs and his eventual supervisor, physics professor Sean Carroll, Cao joined a reading group to learn about the latest ideas in quantum gravity and quantum cosmology.

Around the same time, researchers were busy building lots of new theoretical bridges between quantum physics and gravity. Their work built upon a decades-old conjecture relating quantum theories and theories of gravity known formally as the anti-de Sitter space/conformal field theory correspondence. For instance, QuICS Fellow Brian Swingle was forging connections between quantum entanglement—a strong relationship that two or more quantum particles can share—and geometry, research that used a particular visual language called tensor networks to represent and quantify the structure of entanglement.

That work, along with other research, prompted Cao, Carroll and another collaborator to think about an alternative approach to connecting gravity to quantum physics.

“There’s always been a lingering idea that we can take a classical theory of gravity and quantize it to get quantum gravity,” Cao says, referring to quantization, a recipe for turning a non-quantum theory into a quantum one.

“But you can also run into all sorts of problems if you do that. So why don’t we do the opposite? Instead of trying to take a classical theory and quantize it, let’s take a quantum theory and gravitize it.” So instead of starting with the theory behind gravity—Einstein’s general relativity—perhaps it was possible to start with quantum physics and back out some features of gravity.

In two papers, Cao and his collaborators tried out this idea, first by asking which aspects of geometry could emerge from a system of entangled quantum particles and then by showing in detail that Einstein’s equations of gravity could emerge and be interpreted, in some situations, as equations describing quantum entanglement.

Their first paper began by imagining a system of quantum particles and trying to build space itself out of the pattern of entanglement between the particles. Specifically, it assumed that the information shared between any two sets of particles measured the distance between two corresponding regions in space. Even in this highly theoretical construction, several desirable features of space emerged all on their own. For one, the dimension of space fell out easily from the theory. Additionally, small changes to the amount of entanglement between two quantum systems led to small changes in the emergent space that obeyed a simplified version of Einstein’s equation. There were even more exotic connections that emerged, like analogs of wormholes developing between distantly entangled regions.

Having laid some of the ground work for the idea that geometry could emerge from entanglement, Cao and Carroll took their work a step further in a second paper by showing that one of the key pieces of a theory of gravity—a mathematical object called the metric tensor that measures the lengths of trajectories through space—could be recovered from an entanglement pattern in certain circumstances. For the right pattern, the time evolution of the quantum system could even yield three dimensions of space and one of time—just like in our actual universe.

Cao says that he’s already working to explore additional questions raised by the paper with QuICS Fellow Brad Lackey, who is also interested in the topic. “That’s one of the things that’s really exciting about being at QuICS,” Cao says.

“I get to work with people who come from the information theory perspective, which offers new approaches and insights that help build a bridge between quantum gravity and its possible realization in many-body quantum mechanics.”

QuICS offers two-year Hartree Fellowships to exceptional candidates interested in quantum information science and quantum computing. The fellowship is named for Douglas Hartree, a scientist at the National Institute of Standards and Technologyin the mid-1900s who made substantial contributions to physics and computer science.