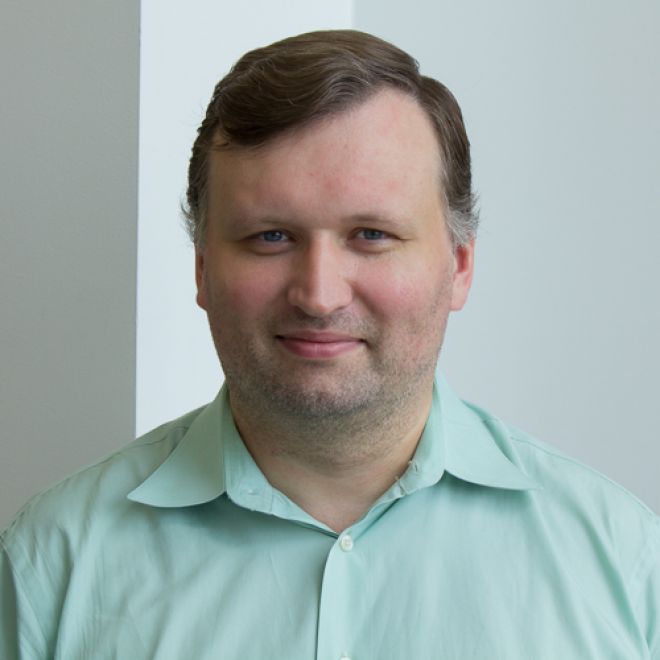 A long-term visitor to the Joint Center for Quantum Information and Computer Science (QuICS) has a definitive personal goal: build a quantum computer.

Dmitri Maslov took a year's sabbatical from the National Science Foundation to pursue this endeavor, temporarily transitioning from a program director in the NSF’s Division of Computing and Communication Foundations to a valued member of the QuICS research community.

"Building a quantum computer is what I want to do as a researcher," Maslov says. "I see myself contributing to this effort by creating software tools, algorithms and methodology that can be used to design efficient quantum computers."

Maslov, who earned his doctorate in computer science from the University of New Brunswick, focuses his research on optimizing quantum algorithms and designing circuits, including those using trapped-ion qubits.

Just as classical computers wouldn’t be nearly as effective without well-designed software and hardware, quantum computers will similarly require careful design, Maslov says. He works on these design aspects for scalable quantum computers.

"I don’t think a scalable quantum computer will be possible without these tools and solutions," he says. "What would classical computers be without, let’s say, an operating system?"

Maslov works to design circuits from the physical level, collaborating closely with experimental researchers at the University of Maryland to get a sense of what may work and what does not.

Maslov came to QuICS because he says he felt that the community of researchers here could help him toward his ultimate goal of a scalable quantum computer.

"Of course you can’t do it alone—you need a large group of people who are interested in the problem," he says. "I believe there is a group at the University of Maryland that shares my goals."

Christopher Monroe, a Distinguished University Professor of physics and a QuICS Fellow, says Maslov’s work with quantum circuits will have increasingly relevant applications to quantum computing.