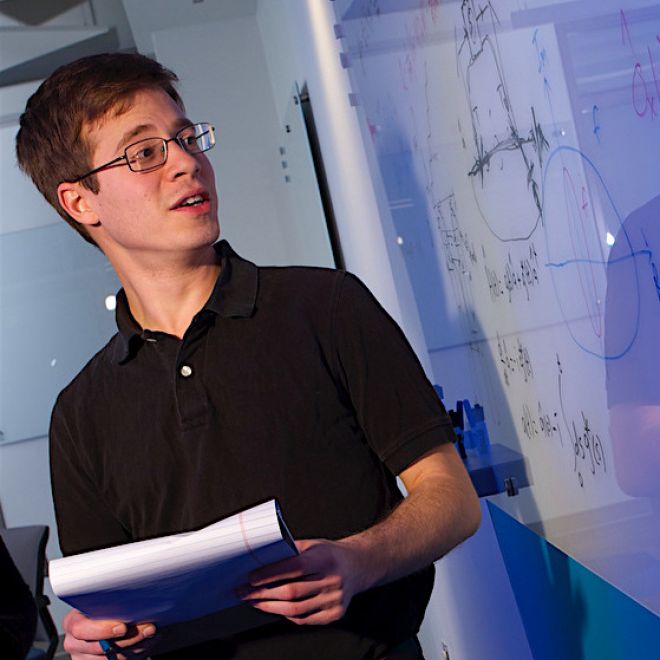 More than a dozen researchers from the Joint Center for Quantum Information and Computer Science (QuICS) are attending the 20th Annual Conference on Quantum Information Processing (QIP), a major international meeting for experts in theoretical quantum information and quantum computing. This year’s meeting convenes in Seattle on Jan. 16 for a week of talks and discussions.

A handful of current and recent QuICS Hartree Postdoctoral Fellows, along with collaborators within QuICS and around the globe, will present their latest research in posters and presentations, including one highly prized plenary talk.

Much of the research presented at QIP etches out a better understanding of the ultimate power of quantum computers by using mathematics to set strict limits on their capabilities. It’s an active field of research, and this year QIP will feature two simultaneous talks for much of the week—a change from previous years that allowed the organizers to feature more research.

Among those accepted talks, two QuICS postdocs, Bill Fefferman (in photo) and Cedric Lin, will present work that looks at the power of a quantum computer with a limited memory—like an ordinary computer with a small hard drive or a small amount of RAM.

Fefferman and Lin proved that the hardest problem such a handcuffed device can solve is also a surprising one. “It’s amazing,” Fefferman says. “If we had only cared about finding the hardest problem, it could have been really contrived. But it’s actually a really natural problem.”

The problem, known as matrix inversion, amounts to solving a set of linear equations, and it’s something that comes up all the time in academia and industry. But the result doesn’t just classify small quantum devices. It also offers a fresh perspective on how to think of those devices without knowing anything about quantum physics.

“Suppose I wanted to go back in time and explain these small devices to Newton and Gauss,” Fefferman says. “I could explain unitaries and the Schroedinger equation,” he adds, referring to elements of the mathematical formalism behind quantum physics. “Or I could simply tell them that they are machines that solve the matrix inversion problem.”

Another talk will be on joint work by Penghui Yao, a recently arrived QuICS Hartree Fellow, and several collaborators. The team recently proved something elusive: To perform certain distributed computations, the number of quantum bits that must be exchanged is much larger than the amount of information an ordinary classical protocol would reveal. The technical result, which answers an open question about the relationship between communication and information, earned the team a coveted plenary talk, which gets a one-hour slot and won’t have to compete with a concurrent session.

QIP will also feature two poster sessions during the first two evenings, and more than 10 poster presentations include a QuICS contributor. Several include graduate students, such as Zachary Eldredge, who plans to make his poster more interactive by affixing an Android tablet with dynamic visuals.