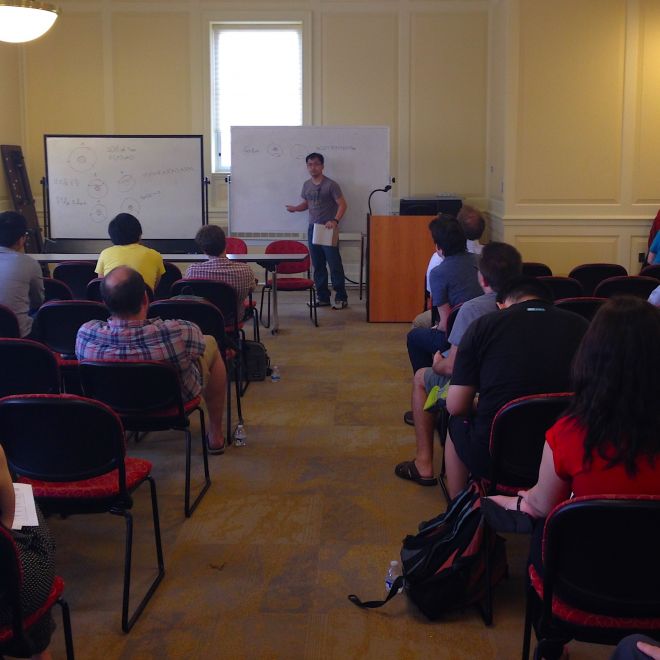 The Joint Center for Quantum Information and Computer Science (QuICS) recently hosted a workshop focused on the intersection of computational complexity and high-energy physics.

The two-and-a-half-day workshop, from July 31 to August 2 at the University of Maryland, featured more than a dozen talks, a poster session, and plenty of time for networking and sharing ideas.

More than 60 researchers—most with backgrounds in computer science and physics—engaged in lively discussions on entanglement, black holes, string theory, algorithms, and more.

Some of the workshop’s topics sounded like the stuff of science fiction, but for the past several years, researchers have uncovered surprising connections between computation—at its most fundamental level—and some of the most spectacular and energetic features of the cosmos.

For instance, scientists have proposed a link between two striking features of modern physics—quantum entanglement and wormholes—arguing that there is a precise mathematical relationship between the two. Others have discovered new algorithms for quantum computers that could quickly churn through the equations of particle physics and predict the outcome of high-energy collisions at accelerators like the Large Hadron Collider in Geneva.

Although physics and computer science have never been far apart, Stephen Jordan, a QuICS Fellow and scientist at the National Institute of Standards and Technology who organized the workshop, says that it’s only recently that quantum information science has been able to tightly weave these two fields together.