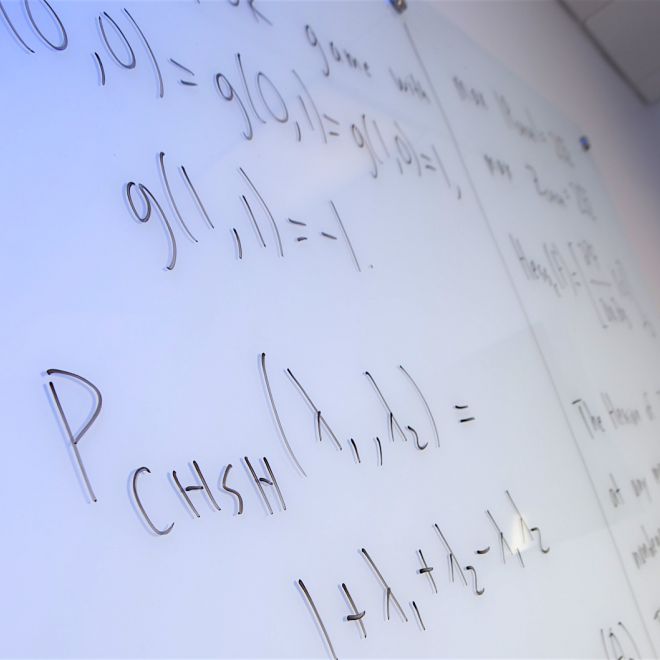 Almost 250 scientists and students involved in quantum computer science and quantum physics are at the University of Maryland this week for the 14th annual Conference on the Theory of Quantum Computation, Communication and Cryptography (TQC), from June 3–5, and a partner workshop on Noisy Intermediate-Scale Quantum (NISQ) technologies, on June 6–7.

The TQC+NISQ meeting—hosted by the Joint Center for Quantum Information and Computer Science (QuICS)—has attracted faculty, research scientists and students from around the world, including dozens of local researchers from the National Institute of Standards and Technology (NIST) and the UMD-based Joint Quantum Institute (JQI).

TQC is being held adjacent to the UMD campus at The Hotel, and features 4 invited talks, 28 contributed talks and 53 posters. “This is definitely as tight of a schedule as we can get for a three-day conference,” says Aarthi Sundaram, a QuICS Hartree Postdoctoral Fellow and one of two local organizers of TQC. “It’s packed really full.”

Sundaram and her co-organizer Gorjan Alagic, an adjunct QuICS Fellow, say that this year’s TQC saw an almost 20 percent rise in paper submissions and includes a very strong slate of talks, all related to understanding and characterizing the advantages that quantum physics can offer over traditional, or classical, approaches to computing.

The NISQ workshop at the end of the week is chaired by QuICS and JQI Fellow Alexey Gorshkov. It will focus on the applications and benchmarking of quantum computers that are likely to be built in the near term—those that are too big to simulate classically but also too small to run the killer apps of quantum computation.

“We are really excited that some of the world's top experimentalists and theorists, including John Preskill, who coined the term NISQ, agreed to speak at the NISQ workshop,” Gorshkov says. “We’re confident that the talks and discussions will help generate exciting new ideas.”

TQC kicks off Monday morning with an invited talk by Ewin Tang, a graduate student in computer science at the University of Washington. Tang made a splash last summer with her discovery that a quantum speedup for solving a particular machine learning problem could also be achieved with a classical algorithm.

The result, which comprised her undergraduate thesis at the University of Texas at Austin, landed her on the Forbes 30 Under 30 list for science. Her talk, titled “Building a classical framework to analyze quantum machine learning speedups,” will discuss ways to generalize the earlier work.

On Tuesday, John Smolin of IBM’s Thomas J. Watson Research Center and David Gosset of the Institute for Quantum Computing at the University of Waterloo will present joint work on a more efficient classical representation of quantum states—work that earned TQC’s first ever Outstanding Paper award.

Many QuICS researchers and alumni will present research during the week, too, including QuICS co-director Andrew Childs and two of his students, Yuan Su and Aaron Ostrander, who will discuss a result that shows how to speed up quantum simulation by randomizing the order of certain operators.

TQC has grown steadily since it was first held in Atsugi, Japan in 2006, consistently gaining ground on QIP—the field’s premier conference—in terms of the quantity and quality of paper submissions. TQC remained in Japan for its first three years, but it has since been held all over the world, with conference locations in Europe, North America and, most recently, Australia.

This year’s TQC is the first to be held in the U.S.

All the talks from TQC+NISQ will be recorded and available to stream after the conference.