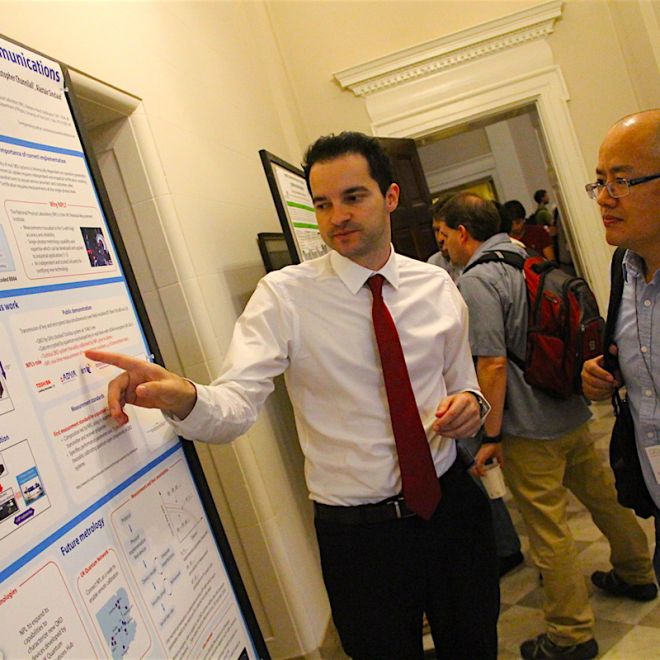 Researchers from around the globe descended on downtown Washington, D.C. last week for the 6th International Conference on Quantum Cryptography, known colloquially as QCrypt.

More than 250 physicists, mathematicians, cryptographers and engineers spent five days (Sept. 12–16) at the Carnegie Institution for Science(link is external) discussing quantum principles and other techniques relevant to cryptography, which is the study of how to communicate securely.

The annual conference was hosted by the Joint Center for Quantum Information and Computer Science(link is external)(QuICS). It marked the first time QCrypt was held in the United States.

“QCrypt has been very successful in bringing together leading experts in quantum cryptography. Having it in Washington, D.C. allowed participants to meet potential new scientific collaborators through regional resources like the University of Maryland and the National Institute of Standards and Technology(link is external) [NIST],” says Yi-Kai Liu(link is external), a QuICS Fellow who served as chair of the conference steering committee.

Topics covered during QCrypt 2016 varied widely, from how to protect against the code-breaking power of future quantum computers to reports on recent experiments that found conclusive evidence for quantum entanglement, a key tool for quantum cryptography.

Liu, who is also a staff scientist in the Applied and Computational Mathematics Division at NIST, says that recent scientific developments in areas like loophole-free Bell tests, homomorphic quantum encryption, and long-distance quantum networks made this year’s conference very timely.

“There is growing realization within the cryptographic community that we need to deploy so-called ‘post-quantum’ cryptosystems soon, systems that are secure against adversaries who have quantum computers,” he says. “Research in this area has been progressing steadily, but now there is a greater sense of urgency, driven by practical necessity.”

Many conference goers took advantage of a free afternoon on Sept. 15 to visit the National Security Agency’s National Cryptologic Museum(link is external) in Ft. Meade, while others took a chartered bus to the University of Maryland to explore a handful of modern labs at the Joint Quantum Institute(link is external) (JQI) and also tour the facilities at QuICS.

Next year’s QCrypt will be held in Cambridge, United Kingdom and will be organized by the UK Quantum Communications Hub(link is external).