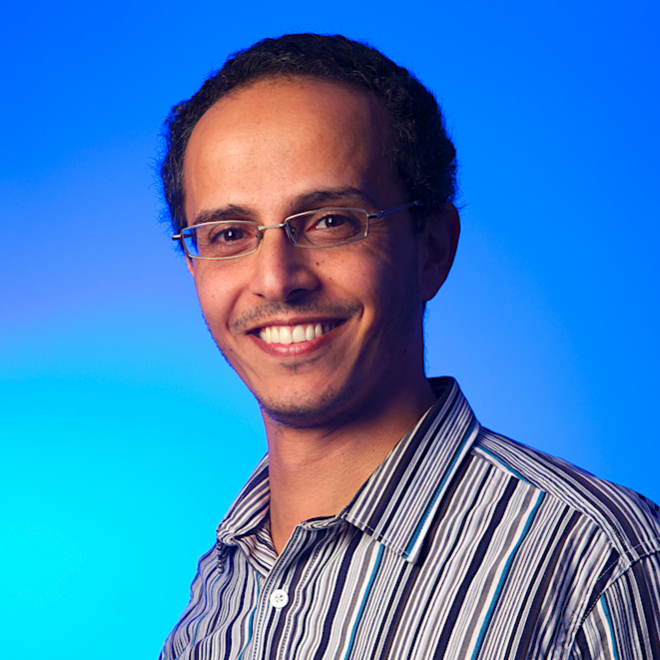 At the dawn of the digital age, engineers often relied on oscilloscopes to test their circuit designs and improve a device’s performance. This indispensable diagnostic tool is still widely used in academia and industry to identify potential faults early in the design process.

But how can scientists characterize design flaws and verify the performance of today's early-stage quantum devices—especially given these devices often defy established scientific principles, or that many conceptual models remain years away from production?
A physicist in the Joint Center for Quantum Information and Computer Science (QuICS) is exploring new methods to assess quantum systems currently under development, as well as evaluate theoretical designs of the future.
Amir Kalev—one of two new Hartree Postdoctoral Fellows to arrive at QuICS last Fall—is using quantum measurement theory and quantum tomography to validate that quantum systems will perform as intended.
"In its simplest form, quantum tomography is a method for scientists to diagnose what is happening in the lab," says Kalev, who earned his doctoral degree in physics from Technion-Israel Institute of Technology. "It's an essential tool for engineering quantum systems, and for understanding the underlying physics involved."
There is plenty of room, however, for improvement with this diagnostic process, Kalev says.
Typical quantum tomography, he explains, involves a “black-box model” where one assumes one knows nothing about the preparation of a quantum state. But in reality, he says, scientists usually have a lot of additional information on hand.
"We know that we want to prepare a specific [quantum] state, and we have all the apparatuses ready to prepare that state. So, we can take that information into account—and use it to our advantage—in our efforts to diagnose a system," Kalev says.
Working with colleagues from the Center for Quantum Information and Control (CQuIC) at the University of New Mexico—Kalev was a research fellow there prior to coming to QuICS—and from SC Solutions Inc., Kalev is applying the concept of "compressed sensing" and studying its implication in the context of quantum tomography.
"If we have specific prior information about the state of the system, we can use tools from the compressed sensing methodology to reduce the number of free parameters—or the number of data points that we need to take—for reliably diagnosing the system," he says.
In 2015, Kalev, Robert Kosut and Ivan Deutsch published their research on this topic in Nature Quantum Information.
Since arriving at QuICS, Kalev has been active in working with the interdisciplinary, cross-institutional group that comprises the QuICS community.
"I'm happy to be here," he says. "Talking with others in QuICS and the adjacent Joint Quantum Institute allows me to think of how my work in quantum tomography can be used on new problems."
One discussion has led to brainstorming between Kalev and Carl Miller, a QuICS Fellow and mathematician at the National Institute of Standards and Technology (NIST).
The two researchers discussed Miller's work in quantum rigidity, which involves certifying the existence of a quantum state even when one doesn't trust the measurement apparatus that one is using.
There is a connection between tomography and rigidity, Kalev believes, because "if we can just look at the data, without trusting the measurement apparatus, and certify the quantum state we wanted to prepare, then we are doing some sort of tomography."
Miller says he presented his ideas on rigidity at a QuICS seminar last fall, and that he and Kalev clicked on the idea of figuring a way to extend it so that it might overlap with Kalev's interest in tomography.
"We're finding new results," says Miller, who believes that quantum rigidity is an ultimate confirmation of the reality of quantum physics.
"One needs to look at complex set of measurement statistics and prove that only one state could have generated those statistics," Miller concludes. “It's like solving a Rubik's cube, it's quite a challenge and also a lot of fun if we succeed."
About the Hartree Fellowship
QuICS offers two-year Hartree Fellowships to exceptional candidates interested in quantum information science and quantum computing. The fellowship is named for Douglas Hartree, a scientist at the National Institute of Standards and Technology in the mid-1900s who made substantial contributions to physics and computer science.
About QuICS
QuICS is a partnership between the University of Maryland and NIST. It is one of 16 centers and labs in the University of Maryland Institute for Advanced Computer Studies.
—Story by Tom Ventsias