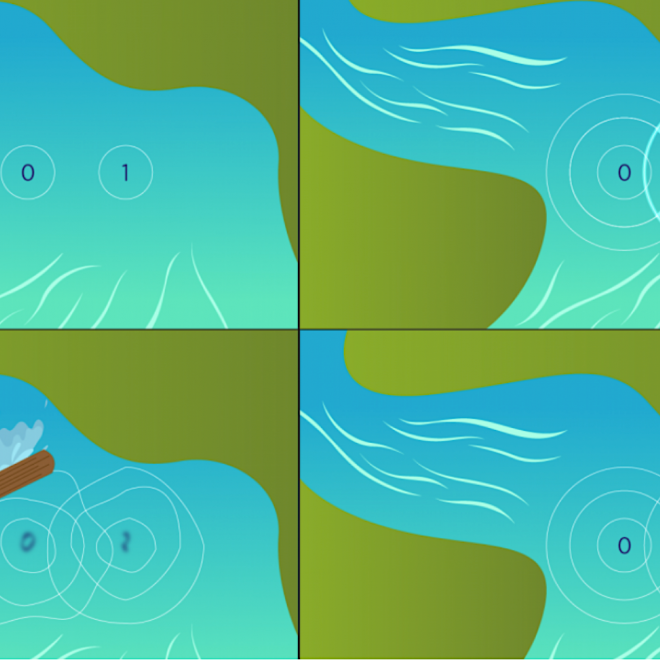 One of the chief obstacles facing quantum computer designers—correcting the errors that creep into a processor’s calculations—could be overcome with a new approach proposed by researchers from the University of Maryland and the California Institute of Technology.

The team of physicists, who are all affiliated with the National Institute of Standards and Technology, may have found a way to design quantum memory switches that will self-correct.

In a theory paper published in the journal Physical Review Letters on Dec. 8, 2020, Alexey Gorshkov, a Fellow in the Joint Center for Quantum Information and Computer Sciences (QuICS), and newly-arrived QuICS Fellow Victor Albert—along with others—proposed an easier path to creating stable quantum bits, or qubits, which ordinarily are subject to environmental disturbances and errors.

Finding methods of correcting these errors is a major issue in quantum computer development, but the research team’s approach to qubit design could sidestep the problem.

Gorshkov also is a Fellow in the Joint Quantum Institute (JQI) located on the UMD campus.

“Error correction complicates an already complicated situation. It usually requires that you build in additional qubits and make additional measurements to find the errors, all of which typically leads to large hardware overhead,” says Simon Lieu, a JQI postdoctoral researcher and the first author of the paper. “Our scheme is passive and autonomous. It does all that extra work automatically.”

Designers are experimenting with many approaches to building qubits. One promising architecture is called a photonic cavity resonator. Within a cavity's tiny volume, multiple photons can be driven to bounce back and forth between reflective walls. The photons, manifesting their wavelike properties in the cavity, combine to form ripple-like interference patterns.

The patterns themselves contain the qubit’s information. It’s a delicate arrangement that, like a ripple on a pond’s surface, tends to dissipate quickly.

It is also easily perturbed. To work, qubits need peace and quiet. Noise from the surrounding environment—such as heat or magnetic fields emitted by other nearby components—can disturb the interference pattern and ruin the calculation.

Rather than construct an elaborate system to detect, measure and compensate for noise and errors, the team members perceived that if the supply of photons in the cavity is constantly refreshed, the qubit’s quantum information can withstand certain amounts and types of noise.

Because the cavity can hold many photons, a qubit involves a substantial number of them, building in some redundancy. In some qubit designs, leaking photons to the environment—a common occurrence—means information gets lost. But rather than defend against this sort of leakage, the team’s approach incorporates it.

Their cavity’s remaining photons would sustain the interference pattern long enough for more photons to enter and replace the missing ones.

A constant stream of fresh photons also would mean that if some photons in the cavity became corrupted by noise, they would be flushed out quickly enough that the damage would not be catastrophic. The interference pattern might waver for a moment, as a pond’s ripples would if a small rock fell in with a disturbing splash, but the ripples’ pulsating sources would remain consistent, helping the pattern—and its quantum information—to reassert itself quickly.

“It’s like adding fresh water,” Lieu says. “Any time the information gets contaminated, the fact that you’re pushing in water and cleaning out your pipes dynamically keeps it resistant to damage. This overall configuration is what keeps its steady state strong.”

The approach would not make the qubits resistant to all types of errors, Lieu says. Some disturbances would still qualify as splashes too dramatic for the system to handle. In addition, the concept applies primarily to the photonic cavities the team considered and would not necessarily help strengthen other leading qubit designs.

The proposed method adds to an arsenal of promising quantum computer error-correction techniques, such as “topological” qubits, which would also be self-correcting but require yet-to-be-made exotic materials. While the team expects the new approach to be particularly useful for quantum computing based on microwave photons in superconducting architectures, it might also find applications in computing based on optical photons.

The team’s work builds on previous theoretical and experimental efforts on photonic qubits. Lieu said that other physicists already have laid most of the necessary groundwork to test the team’s proposal experimentally.

“We are planning to reach out to experimentalists to test the idea,” he says. “They would just need to put a couple of existing ingredients together.”

This story was originally published by NIST News.