Philosophy Professor Has a Comic Take on Quantum Confusion 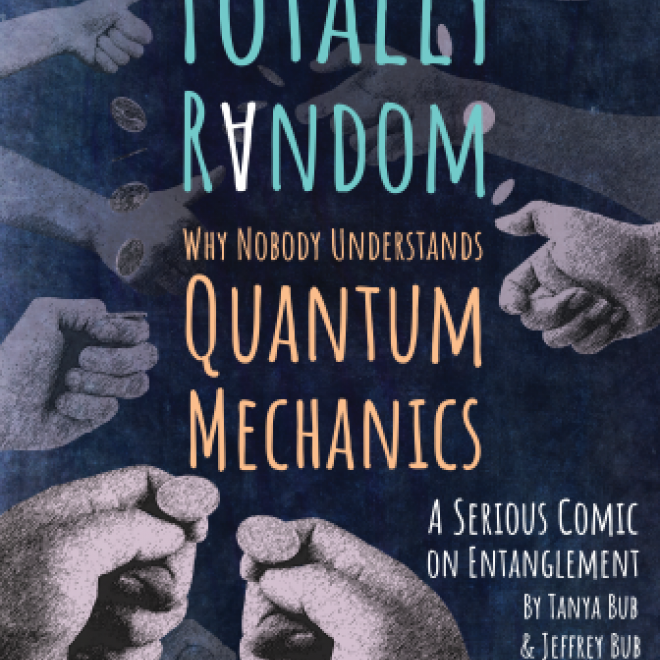 The following story was adapted from a feature article in Terp magazine by Chris Carroll.

Distinguished University Professor Jeffrey Bub, a Fellow in the Joint Center for Quantum Information and Computer Science, started out on course to write a book explaining quantum physics to non-physicists, but 2016’s “Bananaworld” only got halfway there before sinking beneath too many equations.

“I really wrote the book for my son, who at that point was a postdoc in physiology,” the physicist turned philosopher says. “But the math kind of got away from me and when I finished writing, it was pretty technical.”

It’s understandable, given the subject. Quantum theory, the foundation of many modern technologies, makes sense in mathematical terms. In everyday speech, it can sound deranged: effects without causes, or causes that follow effects; things that simultaneously exist in multiple states—one and two, red and blue, alive and dead—until you observe them and they settle into a single state. (But how does an atom know you looked at it?)

In a new book-length comic with a rigorous no-equations approach, “Totally Random: Why Nobody Understands Quantum Mechanics,” Bub takes another run at explaining quantum mysteries to his son—this time with the help of his daughter, Tanya Bub, his co-author and illustrator.

The Bubs don’t attempt to explain why the phenomena actually work (because no one knows), but do explore how they work in practice, using a simple metaphor of coin tosses and a liberal sprinkling of humor to examine the probabilistic nature of quantum reality, a concept that disturbed Einstein and prompted his famous declaration that “God does not play dice with the universe.”

Quantum physicists have mostly adhered to the maxim “shut up and calculate,” using quantum theory in their research but generally skirting the deep foundational questions that occupy Bub.

“Physicists often say, ‘You know, these are the kinds of questions you can discuss over a beer after you’ve finished your real work,’” he says.

So bring on the beer and hold the equations.