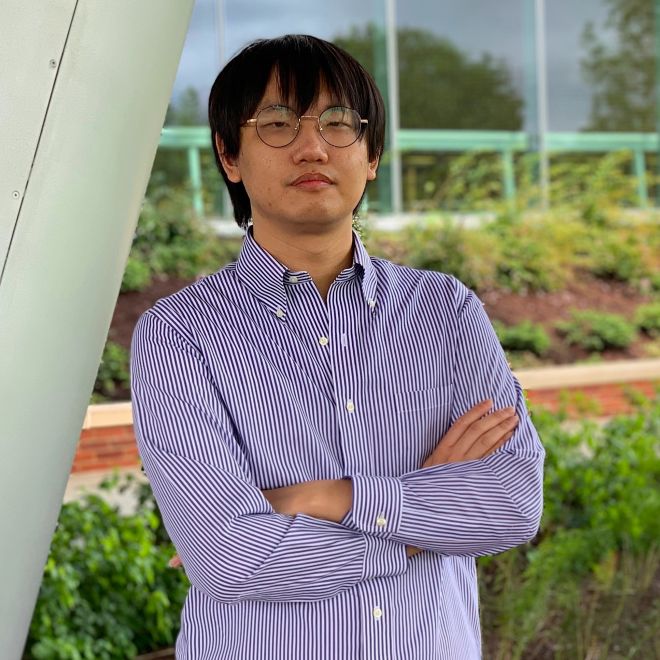 Quantum computers are speed demons, capable of churning through special-purpose calculations in a fraction of the time it would take ordinary computers. But it’s not always easy to point to the source of their speed.

One thing that researchers have discovered is that quantum computers—like ordinary computers—need to spend resources to get the job done. Instead of RAM and hard drive space, though, quantum devices wield the abstract powers of coherence and entanglement—two distinctly quantum resources—to work their magic.

Qi Zhao, the newest Hartree Postdoctoral Fellow at the Joint Center for Quantum Information and Computer Science (QuICS), is an expert in quantum resource theories—the mathematical tools that let researchers characterize and quantify the utility of quantum resources. Zhao has studied both coherence and entanglement with these tools, and he’s contributed theoretical insights to several experimental tests.

But quantum resource theories weren’t always a passion for Zhao, who studied mathematics as an undergraduate and physics as a graduate student at Tsinghua University in China.

“I didn’t know what quantum information was, to be honest,” says Zhao, who ultimately earned his Ph.D. in December of 2018. “I just thought it was magic.”

Zhao’s first exposure to the field came after he began working with his Ph.D. supervisor, Xiongfeng Ma, an expert in quantum cryptography at Tsinghua. Ma assigned Zhao a problem about quantum key distribution—a technique that allows two quantum-powered parties to create a shared secret.

“Xiongfeng gave me the project about QKD, but I didn’t need to only focus on that project,” Zhao says. “I could choose anything I’m interested in.”

Ma’s group included experts in physics, math and electrical engineering, and it was through interacting with other group members that Zhao became enamored with resource theories. “With these theories, we can understand how quantum is different from classical,” says Zhao. “It’s because there’s some quantum resource—like coherence, entanglement or other resources. These are the key elements that distinguish quantum physics from classical physics.”

Zhao was dismayed by a deficit he perceived in the resource theory literature about coherence: There were many important results, but they were based on unphysical assumptions. In the wild, real quantum devices would never have access to infinitely many copies of a quantum system or experience identical kinds of noise.

In a paper published in the journal Physical Review Letters in 2018, Zhao, together with Ma and several other colleagues, tackled one aspect of this issue. In prior work, researchers had calculated how much coherence it takes to accomplish certain quantum tasks—such as preparing a particular quantum state—but those limits were only valid in the asymptotic limit. Zhao and his collaborators wanted to prove similar facts about the one-shot setting: What could be accomplished with a finite amount of coherence in a single run of a protocol?

In particular, they studied coherence dilution, proving relationships between mathematical measures of coherence and the rate at which certain operations would dilute the resource—a closer look at how the resource is “spent” while preparing particular states. It was a result that added to the understanding of coherence resource theories and touched on applications like quantum key distribution and quantum random number generation. In a follow-up paper published in the journal IEEE Transactions on Information Theory in 2019, Zhao and colleagues developed a one-shot theory of coherence distillation—the opposite of dilution, in which the goal is to start with a particular quantum state and process it to concentrate its coherence.

Entanglement, which binds quantum systems together in a way that is impossible in classical physics, has several important characteristics. For instance, there are many ways for 10 quantum particles to be entangled. They can all be mutually entangled with each other; or they could be entangled in blocks of 5; or 3 could be entangled with the remaining 7. It can be time consuming for experiments to detect exactly how entanglement is distributed across a real system.

In a paper published in the journal Physical Review X in 2018, Zhao again teamed up with Ma and several other colleagues. They sought to provide explicit (and efficient) protocols for experimentalists who want to detect entanglement in their experiments—to determine both how much entanglement is present and how it is spread out.

The team developed tools—essentially sets of quantum measurements—that could reveal information about the entanglement structure of a collection of quantum systems. They also teamed up with an experimental group to demonstrate how the tools could be used in practice, showing that they could successfully characterize the entanglement present among 8 photons. Zhao and several coauthors extended the theoretical results to allow for the detection of more entanglement structures in a follow-up paper published in the journal npj Quantum information in 2019.

Zhao has studied other topics with practical applications, too. He was on a team that reported on the experimental demonstration of device-independent quantum random number generation in a 2018 paper published in the journal Nature. “Qi's past contributions are connected to the work of other researchers here at QuICS,” says QuICS Fellow Carl Miller. “I did some earlier foundational work on device-independent random number generation, and Qi was on one of the teams that brought that topic from theory to reality. As with all of the Hartree Fellows, I look forward to seeing what new ideas Qi will explore during his time at QuICS.”

For his part, Qi is also looking forward to the opportunity.

“I wanted to do more with quantum computing,” Zhao says, “and I think QuICS is the best choice for doing quantum computing. There are different people from different fields, and the Hartree Fellowship gives you a lot of flexibility to collaborate with others and pursue what you want.”