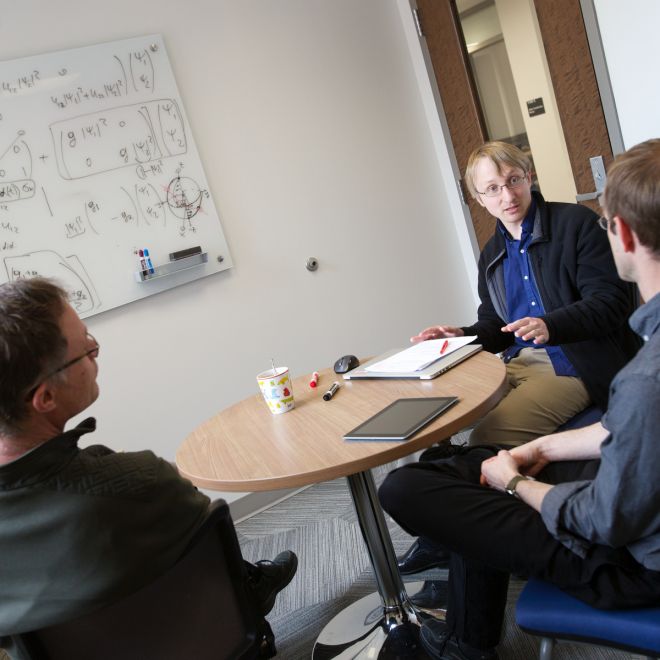 Brad Lackey was stuck on a problem that scientists have been studying for decades.

The Department of Defense (DoD) cryptographic designer and mathematician—who’s also a Fellow in the Joint Center for Quantum Information and Computer Science (QuICS)—was having difficulty on the issue of quantizing constrained mechanical systems.

But a chance conversation with a physicist in the University of Maryland’s newest center focused on quantum information science helped Lackey work his way through it.

Jacob Taylor, QuICS co-director and scientist at the National Institute of Standards and Technology (NIST), had stopped by Lackey’s office and looked at his work. Taylor noted that Lackey’s calculations were allowing the mass of particles to vary from point to point, while it’s impossible for particles to vary in mass.

This simple conversation, Lackey says, gave him the insight needed to solve part of the problem.

“An offhand remark about the way a physicist views the problem just completely solved the stumbling block I was having and got me through it,” he says. “Now, I’m on to the next problem.”

Such interactions are emblematic of the working environment in QuICS, a partnership between the University of Maryland and NIST that aims to advance the field of quantum computing and quantum information science.

In early 2015, QuICS opened its new facilities on the third floor of the Computer and Space Sciences Building on the Maryland campus. The renovated space—replacing 1960s-era offices with new open areas complemented by colorful carpet, sleek whiteboards and comfortable furniture—helps encourage discussion and collaboration among QuICS fellows, postdocs, students and visitors.

Andrew Childs, an associate professor of computer science and co-director of QuICS, says a strong point of the new space are the common areas that help bring researchers from different backgrounds together.

“We learn a lot of interesting things,” Childs says. “It’s a place where people come together and have these discussions across disciplines.”

Kimmel is also collaborating on quantum complexity problems with Bill Fefferman, a QuICS postdoctoral researcher with whom she shares an office.

The new workspace has “made a huge difference,” Kimmel says. Before the new space opened, QuICS researchers had offices spread across different buildings—even different campuses, she says—but now it’s easy to simply walk over to talk with anyone else and work on problems together.

“If there’s a question that can’t be answered here, it’s hard to imagine who else I would go to,” Kimmel says.

Michael Jarrett, a doctoral student at QuICS, says the center has thrived since moving into what he calls some of the best office space on campus. He says the combination of the facilities and the faculty makes the center an exciting and welcoming place to work.

DoD mathematician Lackey, whose office whiteboards are currently lined with fresh equations, says the center also provides a location for meetings with other government and industry partners and work through projects together.

“It gives us a chance to collaborate on things we wouldn’t get to talk about otherwise,” he says.