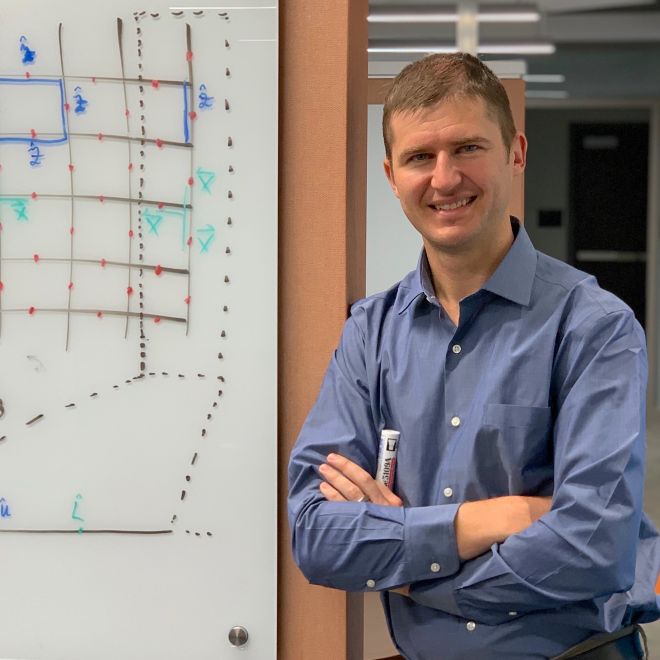 Victor Albert, a physicist at the National Institute of Standards and Technology (NIST) and Fellow at the Joint Center for Quantum Information and Computer Science (QuICS), loves getting to the bottom of things, distilling problems to their most basic and general mathematical root. He attributes this tendency to his Russian heritage, having moved to the United States with his family at the age of 10. “The Russian in me generalized things as much as I could,” Albert jokes.

From an early age, Albert realized that—at least when it comes to physics—intuition could often lead him astray. He remembered this first happening in eighth grade. “I had a science teacher, Mr. Lanni, who was really good,” Albert says, recalling an in-class demonstration that captured his attention. “On the first day of class, he had two stacks of books, and he put a sheet of paper over them like a bridge. He blew really hard under the paper, and everybody thought that that would flip the paper up. And it actually went down, because by blowing the air he created less pressure below the piece of paper than above. That really set the tone for the whole class.”

Inspired by his experiences in Mr. Lanni’s class, as well as other science classes in high school, Albert went on to pursue an undergraduate degree in physics and math at the University of Florida (UF), where he did computational research in quantum chemistry. He simulated the behavior of fullerenes—big tumbleweed-like molecules made up of carbon atoms. He looked at how they react when crashing into a different atom, as well as how they bounce off walls made of graphite.

Albert is the first to admit that his choice of topic at this point wasn’t particularly deliberate. “As a first-year undergrad, you don't have your pick of the litter for research,” he says. But the experience did give him an appreciation for the patient guidance of his advisers, UF professor of physics Jack Sabin and UF professor of physics and chemistry Frank Harris. “These people took me on,” he says. “They even offered to pay me. I declined. I don't know why. I didn’t want the extra pressure. And they were super nice. If need be, they'd go through my code line by line to catch factors of two and other small errors.”

These mentors first introduced Albert to quantum physics—the rules governing nature’s smallest particles—which has become the foundation of his academic career. He went on to graduate school in physics at Yale, joining the group of Liang Jiang in his second year.

Shortly thereafter, Jiang and another Yale physicist, Leonid Glazman, pointed Albert to an intriguing experimental finding. A team of researchers at the University of Chicago used a network of capacitors and inductors (decidedly non-quantum electrical components) to simulate a seemingly quantum behavior: electrical currents at certain frequencies being conducted along the edges of the network, a phenomenon known as edge currents. These edge currents usually only appear inside of exotic quantum materials, where they can persist regardless of what’s happening inside the material. This insensitivity to the details of the material means that edge currents can be very robust.

But how did the researchers replicate this quantum phenomenon with simple electronics? To Albert, it seemed like a stroke of genius. “The University of Chicago researchers had some God-given experimental intuition to understand that they did something correctly, without using any equations," he says. “But I didn't understand it.”

Albert knew that behind their intuition, there must be a rigorous mathematical framework, and he immediately went to work trying to derive it. Not only did he find a simpler setup that would achieve the same result, but he also constructed a general theory of such inductor-capacitor networks. Since these are classical at heart, the edge currents of such circuits were not as intrinsically robust as their quantum cousins. But this work helped pave the way for new directions in classical circuit design.

From there, Albert turned his attention to quantum information, the main focus of Jiang’s research and one of the hottest areas of quantum physics to this day. Quantum information extends the decades-old study of information theory into the quantum realm. A regular computer deals in classical information, the binary 1’s and 0’s that are called bits. Everything your laptop does boils down to manipulating those 1’s and 0’s to do all sorts of tasks. In a quantum computer, though, the bits themselves can be not just 0 or 1, but a quantum superposition of the two. This makes it possible to perform some computational tasks a lot faster.

But these quantum bits, or qubits, are also inherently fragile. Any tiny interaction with the outside world can knock the qubit out of its superposition. Much of quantum information and quantum computing research, and of what Albert went on to study, was motivated by different strategies for mitigating this fragility.

Albert dedicated the bulk of his graduate career to one strategy for alleviating qubit fragility: Instead of thinking of the best way to protect single, isolated qubits, one can think of them as part of a bigger environment. In a messy experiment—complete with vacuum chambers and towers of optics and electronics—a qubit can evolve over time until it comes to rest in one of several possible quantum states. Amidst this mess, it’s very tough to predict which of the final states the qubit will land in, making it unreliable for computation.

One trick is to include the destructive nature of the surrounding experiment in the calculations. This can be tedious, but it would give a more accurate prediction of where the qubit will end up. Armed with this prediction, scientists can try to engineer quantum experiments that use the noisy environment as a way of manipulating quantum information. Instead of fighting the noise, there may be ways to harness it.

Albert figured out which of the several final states a qubit will end up in depending on the original quantum information it encoded and specifics of the environment. The beauty of Albert’s theory is that it doesn’t assume any particular implementation—it could equally well be applied to atoms, ions, superconducting qubits or photons. He had hit the mathematical bedrock of the question.

After finishing his Ph.D., Albert received the prestigious Lee A. DuBridge fellowship at Caltech, where he worked with John Preskill. There, Albert came back to a subject he’s known since his undergraduate research days: molecules. With Preskill and experimental collaborator Jacob Covey, Albert developed a prescription for using molecules, rather than isolated atoms or ions, to robustly store quantum information. This time, the strategy for mitigating qubits’ fragility was to actively detect when they had been disturbed, and to compensate for it—a procedure known as quantum error correction.

Molecules are more challenging to work with because they are more complicated than single atoms or ions. But this complexity also holds the promise of storing a lot of information in a single molecule. The prescription of Albert and his co-authors laid out how these advantages can be harnessed to create error correcting quantum bits with various kinds of molecules.

Albert’s passion and dedication aren’t confined to his academic pursuits. When he’s not boiling quantum phenomena down to their most basic form, he can be found honing his skills on the drums. While at UF, he played in the university’s drumline, and accompanied the football team to two national championships. During his graduate career and postdoctoral research, Albert participated in the annual APS March Meeting’s physics sing-along, which features familiar tunes recast as songs about science, accompanied by a “nerdy rock band,” as Albert calls it. Since its inception in 2006, the band’s drummer has changed, but it has remained a Soviet-born physicist named Victor—the position was previously held by Victor Yakovenko, a Fellow of the Joint Quantum Institute and a professor of physics at the University of Maryland (UMD).

Now, Albert is bringing his quantum information expertise, his penchant for generalizing things, and his drumming talents to QuICS. Although he hasn’t settled on what specific topic he’ll tackle next, he is looking forward to collaborating with other researchers at UMD and NIST. “Science is rarely straightforward. I don't always pursue answering particular questions. Sometimes, I just want to understand a particular paper, a field which is foreign to me, or learn from collaborating with a particular person,” Albert says, “And at QuICS, you name a topic and there's somebody there that's researching that topic. It’s an exciting place.”