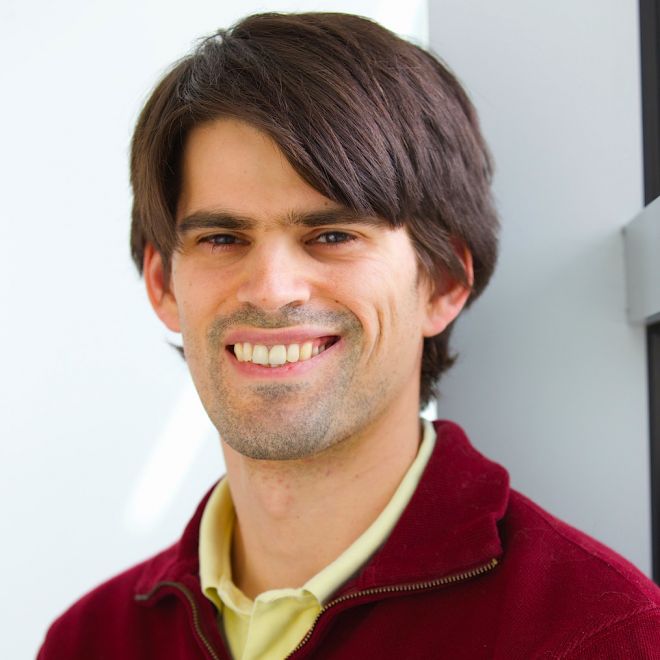 Michael Gullans, a recently-arrived Fellow in the Joint Center for Quantum Information and Computer Science (QuICS), has made his career staring into the nitty-gritty corners of physics—places where randomness reigns. That’s because understanding the real, messy world requires researchers to understand the way that many pieces interact, combine and result in new, complex physics. So physicists, like Gullans, have to wade into that murky realm and find the method hidden in the madness.

Gullans, who is also a physicist in the Nanoscale Device Characterization Division of the National Institute of Standards and Technology (NIST), is returning to QuICS, where he previously worked as a postdoctoral researcher. His work, then and now, targets challenging problems that arise from interactions, such as how to limit the impact of the errors that inevitably pop up in quantum computations. To dive into these problems, he investigates the role played by randomness—introduced by things like noise or quantum measurements—in groups of many interacting quantum objects.

While Gullans primarily works as a theorist, he often collaborates with experimental physicists and pursues topics grounded in applications. His practical focus isn’t surprising in light of where he started. As an undergraduate, Gullans enrolled at the University of California, Berkeley as a materials engineering student.

“My affair with physics started when I was an undergraduate,” says Gullans. “I actually started off as an engineering major, and ended up switching to physics because I liked the style of approaching problems and describing complex systems.”

In particular, he recalls that the beauty of Maxwell’s equations, which describe the behaviors of and relationships between electric and magnetic fields, caught his attention in a physics class. He ultimately earned a bachelor’s degree in engineering physics.

During his time as an undergraduate he worked in Jonathan Wurtele’s lab and was introduced to using a free-electron laser—a very powerful type of laser that generates light using electrons moving near the speed of light. In this research, he explored the hectic interactions of very energetic particles that arise in plasma physics—the complex physics of particles in liquids and gasses that interact through electric and magnetic fields. This work also introduced him to atomic, molecular, and optical physics, which led him to working with Mikhail Lukin at Harvard University for his graduate studies.

“I started getting more interested in quantum systems and also many-body physics,” says Gullans. “And at that time, there was a lot of excitement in physics around optical lattice systems.”

Optical lattices—orderly grids of light that can cool and hold atoms—served as a bridge between the world of optics and the world of quantum behaviors in solid materials. With optical lattices researchers have the freedom to tailor experiments and explore the physics that plays out in the lattices of solid materials without the constraints real solids impose. He also started to investigate the physics of electrons and quantum dots and how they can be used as the foundational unit of information storage in quantum computers—qubits.

To make quantum computers that are large enough to solve practical problems a reality, researchers have to conquer the randomness that dominates the microscopic world. They must understand how individual quantum objects behave, how they interact with the noise from the larger world, how they can interact with classical control systems through quantum measurements, and how they can be combined so that they maintain useful organization instead of falling into confusion. For quantum computers to work, not only do many miniscule things have to come together and interact in complex ways but they also have to maintain delicate quantum states without succumbing to randomness from the noise of the surrounding world or the poking and prodding of researchers.

Drawing on techniques from his experience with many-body physics, Gullans often investigates particularly untidy problems where particles interact significantly and the situation can’t be understood as a simple variation of a related case without the interactions.

During Gullans’ time as a QuICS post-doctoral scholar from 2014 to 2017, he worked with QuICS founding co-director Jacob Taylor. They worked to understand the interactions that play out in delicate quantum landscapes and how to utilize quantum phenomenon in new technologies.

“Once you have all the pieces of a quantum computer, it really starts to become a many-body problem where you can't just think about the individual components anymore—you have to design the system itself,” says Gullans. “So that's where the perspective of a many-body theorist can contribute.”

His work at QuICS led to a collaboration with researchers at Princeton where he eventually moved for more post-doctoral work with Jason Petta and David Huse. Many of the problems he has worked on revolve around understanding particular states of quantum particles and the way that many quantum objects can maintain order or fall into randomness. His work has added to the theoretical understanding of the complex problems that arise when many quantum objects are combined into a quantum computer and how to best avoid negative results.

In a recent collaboration with Princeton physicist David Huse, Gullans explored how for a quantum system, such as a quantum computer, the boundary between maintaining stable states and falling into disorder is influenced by how often quantum measurements are applied. The pair looked at the competition between measurements and entanglement interactions—the process of two quantum particles becoming intrinsically entwined—and how changes in the balance of the two can dramatically shift how reliable the system is for information storage. The shift in behavior is described as a phase transition and is similar to the dramatic change of water freezing into ice. But in this case, the sudden change is due to the influence of quantum measurements instead of temperature or pressure.

Gullans and Huse made and analyzed multiple theoretical models to investigate the transition and described how it could be applied to various physical situations. Through their analysis, they identified how to triumph over errors and set things up to stably store the maximum amount of quantum information when dealing with many noisy qubits. Their result suggests new techniques that might help researchers defeat the errors plaguing quantum computers.

Gullans says that at QuICS he is hoping to continue providing new insights into quantum information science and to contribute to the global effort to make practical quantum computers a reality. His goals include making quantum error correction more efficient and studying the practical application of fault-tolerance in real quantum computers, such as those being developed by other QuICS fellows.

“When I was a grad student, we were very interested in quantum computing within my field, but it wasn't as much of a focus broadly within physics,” says Gullans. “I wasn't necessarily expecting to be working on building a quantum computer when I started my Ph.D.”