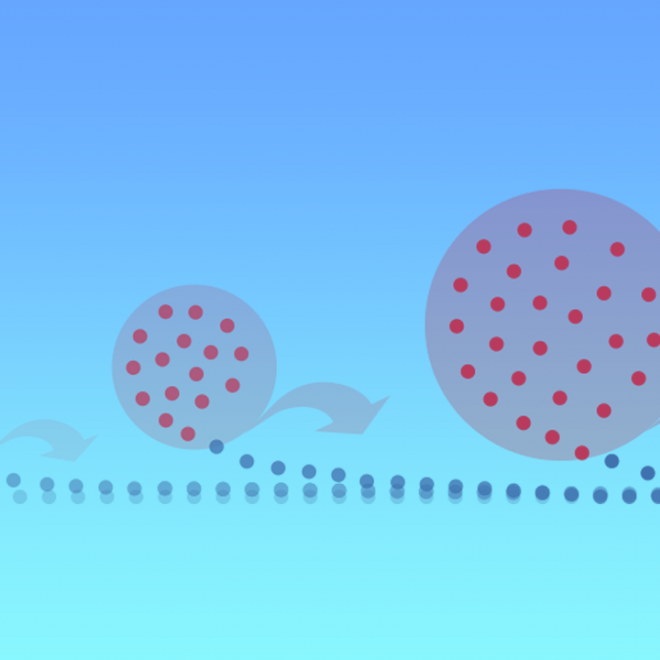 August 4, 2021
Even though quantum computers are a young technology and aren’t yet ready for routine practical use, researchers have already been investigating the theoretical constraints that will bound quantum technologies. One of the things researchers have discovered is that there are limits to how quickly quantum information can race across any quantum device.
These speed limits are called Lieb-Robinson bounds, and, for several years, some of the bounds have taunted researchers. For certain tasks, there was a gap between the best speeds allowed by theory and the speeds possible with the best algorithms anyone had designed. It’s as though no car manufacturer could figure out how to make a model that reached the local highway limit.
But unlike speed limits on roadways, information speed limits can’t be ignored when you’re in a hurry—they are the inevitable results of the fundamental laws of physics. For any quantum task, there is a limit to how quickly interactions can make their influence felt (and thus transfer information) a certain distance away. The underlying rules define the best performance that is possible. In this way, information speed limits are more like the max score on an old school arcade game than traffic laws, and achieving the ultimate score is an alluring prize for scientists.
Now a team of researchers—led by Joint Center for Quantum Information and Computer Science (QuICS) Fellow Alexey Gorshkov—has found a quantum protocol that reaches the theoretical speed limits for certain quantum tasks. Their result provides new insight into designing optimal quantum algorithms and proves that there hasn’t been a lower, undiscovered limit thwarting attempts to make better designs. Gorshkov—who is also a Fellow of the Joint Quantum Institute (JQI) and a physicist at the National Institute of Standards and Technology (NIST)—and his colleagues present their new protocol in a recent article published in the journal Physical Review X.
“This gap between maximum speeds and achievable speeds had been bugging us, because we didn't know whether it was the bound that was loose, or if we weren't smart enough to improve the protocol,” says Minh Tran, a JQI and QuICS graduate student who was the lead author on the article. “We actually weren't expecting this proposal to be this powerful. And we were trying a lot to improve the bound—turns out that wasn't possible. So, we’re excited about this result.”
Unsurprisingly, the theoretical speed limit for sending information in a quantum device (such as a quantum computer) depends on the device’s underlying structure. The new protocol is designed for quantum devices where the basic building blocks—qubits—influence each other even when they aren’t right next to each other. In particular, the team designed the protocol for qubits that have interactions that weaken as the distance between them grows. The new protocol works for a range of interactions that don’t weaken too rapidly, which covers the interactions in many practical building blocks of quantum technologies, including nitrogen-vacancy centers, Rydberg atoms, polar molecules and trapped ions.
Crucially, the protocol can transfer information contained in an unknown quantum state to a distant qubit, an essential feature for achieving many of the advantages promised by quantum computers. This limits the way information can be transferred and rules out some direct approaches, like just creating a copy of the information at the new location. (That requires knowing the quantum state you are transferring.) 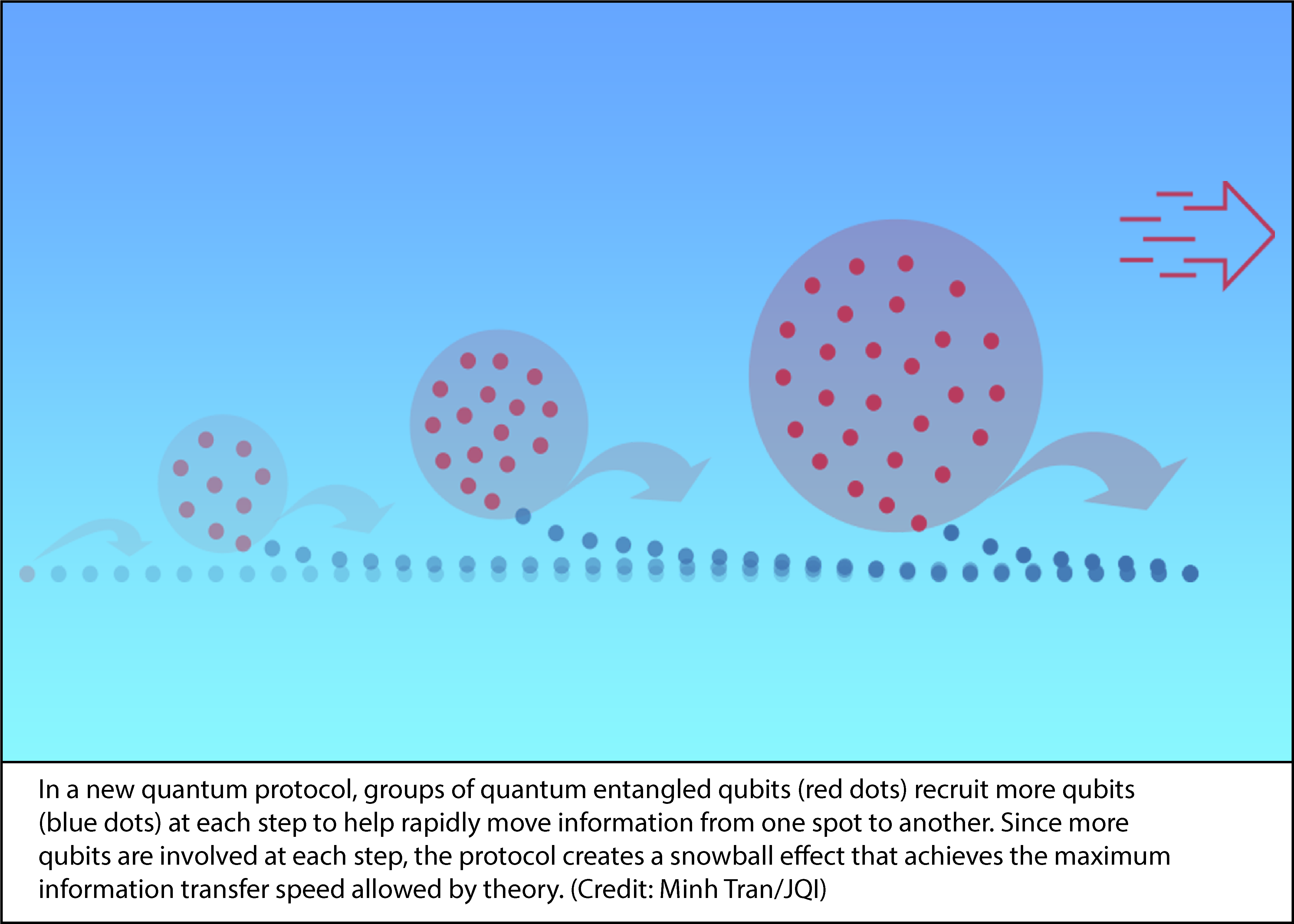 In the new protocol, data stored on one qubit is shared with its neighbors, using a phenomenon called quantum entanglement. Then, since all those qubits help carry the information, they work together to spread it to other sets of qubits. Because more qubits are involved, they transfer the information even more quickly.
This process can be repeated to keep generating larger blocks of qubits that pass the information faster and faster. So instead of the straightforward method of qubits passing information one by one like a basketball team passing the ball down the court, the qubits are more like snowflakes that combine into a larger and more rapidly rolling snowball at each step. And the bigger the snowball, the more flakes stick with each revolution.
But that’s maybe where the similarities to snowballs end. Unlike a real snowball, the quantum collection can also unroll itself. The information is left on the distant qubit when the process runs in reverse, returning all the other qubits to their original states.
When the researchers analyzed the process, they found that the snowballing qubits speed along information at the theoretical limits allowed by physics. Since the protocol reaches the previously proven limit, no future protocol should be able to surpass it.
“The new aspect is the way we entangle two blocks of qubits,” Tran says. “Previously, there was a protocol that entangled information into one block and then tried to merge the qubits from the second block into it one by one. But now because we also entangle the qubits in the second block before merging it into the first block, the enhancement will be greater.”
The protocol is the result of the team exploring the possibility of simultaneously moving information stored on multiple qubits. They realized that using blocks of qubits to move information would enhance a protocol’s speed.
“On the practical side, the protocol allows us to not only propagate information, but also entangle particles faster,” Tran says. “And we know that using entangled particles you can do a lot of interesting things like measuring and sensing with a higher accuracy. And moving information fast also means that you can process information faster. There's a lot of other bottlenecks in building quantum computers, but at least on the fundamental limits side, we know what's possible and what's not.”
In addition to the theoretical insights and possible technological applications, the team’s mathematical results also reveal new information about how large a quantum computation needs to be in order to simulate particles with interactions like those of the qubits in the new protocol. The researchers are hoping to explore the limits of other kinds of interactions and to explore additional aspects of the protocol such as how robust it is against noise disrupting the process.
—Story by Bailey Bedford
JQI and QuICS graduate students Abhinav Deshpande and Andrew Y. Guo, and University of Colorado Boulder Professor of Physics Andrew Lucas also contributed to the study.