Corkscrew Photons May Leave Behind a Spontaneous Twist 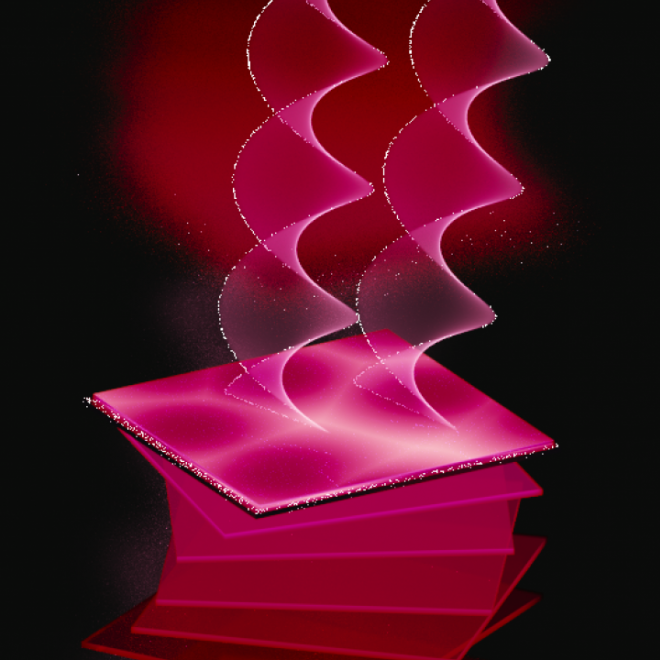 Everything radiates. Whether it's a car door, a pair of shoes or the cover of a book, anything hotter than absolute zero (i.e., pretty much everything) is constantly shedding radiation in the form of photons, the quantum particles of light.

A twin process—absorption—is usually also present. As photons carry away energy, passers-by from the environment can be absorbed to replenish it. When absorption and emission occur at the same rate, scientists say that an object is in equilibrium with its environment. This often means that object and environment share the same temperature.

Far away from equilibrium, new behaviors can emerge. In a paper published August 1, 2019 as an Editors' Suggestion in the journal Physical Review Letters, scientists at the Joint Quantum Institute (JQI) and Michigan State University suggest that certain materials may experience a spontaneous twisting force if they are hotter than their surroundings.

“The fact that a material might feel a torque due to a temperature difference with the environment is very unusual,” says lead author Mohammad Maghrebi, a former JQI postdoctoral researcher who is now an assistant professor at Michigan State University.

The effect, which hasn't yet been observed in an experiment, is predicted to arise in a thin ribbon of a material called a topological insulator (TI)—something that allows electrical current to flow on its surface but not through its innards.

In this case, the researchers made two additional assumptions about the TI. One is that it is hotter than its environment. And another is that the TI has some magnetic impurities that affect the behavior of electrons on its surface.

These magnetic impurities interact with a quantum property of the electrons called spin. Spin is part of the basic character of an electron, much like electric charge, and it describes the particle’s intrinsic angular momentum—the tendency of an object to continue rotating. Photons, too, can carry angular momentum.

Although electrons don’t physically rotate, they can still gain and lose angular momentum, albeit only in discrete chunks. Each electron has two spin values—up and down—and the magnetic impurities ensure that one value sits at a higher energy than the other. In the presence of these impurities, electrons can flip their spin from up to down and vice versa by emitting or absorbing a photon that carries the right amount of energy and angular momentum.

Maghrebi and two colleagues, JQI Fellows Jay Deep Sau and Alexey Gorshkov, showed that radiation emanating from this kind of TI carries angular momentum skewed in one rotational direction, like a corkscrew that twists clockwise. The material gets left with a deficit of angular momentum, causing it to feel a torque in the opposite direction (in this example, counterclockwise).

In addition to his appointment in JQI, Gorshkov is a Fellow in the Joint Center for Quantum Information and Computer Science (QuICS).

The authors say that TIs are ideal for spotting this effect because they play host to the right kind of interaction between electrons and light. TIs already link electron spin with the momentum of their motion, and it's through this motion that electrons in the material ordinarily absorb and emit light.

If an electron on the surface of this particular kind of TI starts with its spin pointing up, it can shed energy and angular momentum by changing its spin from up to down and emitting a photon. Since the TI is hotter than its environment, electrons will flip from up to down more often than the reverse. That’s because the environment has a lower temperature and lacks the energy to replace the radiation coming from the TI. The result of this imbalance is a torque on the thin TI sample, driven by the random emission of radiation.

Future experiments might observe the effect in one of two ways, the authors say. The most likely method is indirect, requiring experimenters to heat up a TI by running a current through it and collecting the emitted light. By measuring the average angular momentum of the radiation, an experiment might detect the asymmetry and confirm one consequence of the new prediction.

A more direct—and likely more difficult—observation would involve actually measuring the torque on the thin film by looking for tiny rotations. Maghrebi says that he's brought up the idea to several experimentalists.

"They were not horrified by having to measure something like a torque, but, at the same time, I think it really depends on the setup," he says. "It certainly didn't sound like it was impossible."