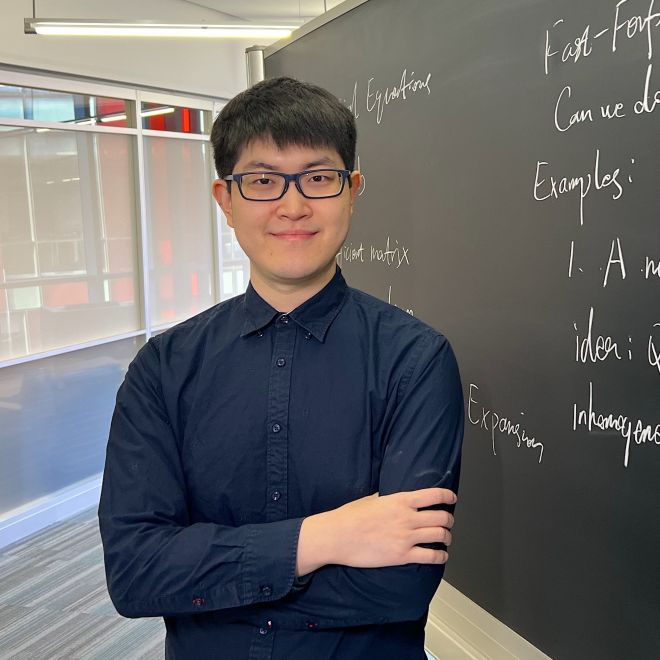 It takes people with diverse perspectives to turn counterintuitive and finicky quantum phenomena into practical machines. Physicists, computer scientists, mathematicians and others are contributing to efforts to build quantum computers that harness the unique opportunities provided by quantum physics.

Dong An, a Hartree Postdoctoral Fellow at the Joint Center for Quantum Information and Computer Science (QuICS), is relatively new to the world of quantum computers, but he is using his background in applied mathematics to design better quantum algorithms.

A childhood interest in math led An to study math and economics as an undergraduate at Peking University in China. During his studies, he decided to focus on applied mathematics, and he graduated in 2016.

It wasn’t until his graduate research at the University of California, Berkeley that he was introduced to quantum mechanics. There, as a math graduate student, he studied how to use classical computers to solve quantum problems. Specifically, he focused on solving the Schrödinger equation—the equation at the heart of quantum mechanics that describes how quantum objects change over time.

He and his colleagues found a way to simulate the Schrödinger equation much faster in certain situations. In the standard mathematical language that physicists generally write the Schrödinger equation in, its solution oscillates quickly over time in a way that can hamper simulations. An and his colleagues found a way to translate it to a mathematical language where simulations only have to deal with slower oscillations.

A couple of years into his graduate research, An reached a decision point: Did he want to continue studying the same thing, or did he want to shift his focus? He discussed his options with his adviser Lin Lin, who is an associate professor in the mathematics department at UC Berkeley.

Doubts about the future of quantum computing—which An still harbors—hung over the choice.

“It is kind of risky, because we don't know whether the quantum computers can be built in the next five or 10 years or so,” An says. “But although it is risky, it is very, very interesting and challenging, and this is a really active field.”

He made the switch but initially stuck to familiar territory. Instead of finding ways to solve the Schrödinger equation with classical computers, he was now tackling it with quantum computers. He also branched into applying quantum algorithms to solving a linear system of equations—a group of related equations each written as a sum of individual unknowns without exponents. Solving the system means finding the values of the unknowns that make all the equations simultaneously true.

In a paper published in ACM Transactions on Quantum Computing, An and Lin showed an improved way to use this approach and achieve a near optimal implementation. The project required finding a balance between changing the conditions slowly enough that the errors would be small and going so slowly that it would require excessive computational resources.

After that project, An and his colleagues worked on developing an even better way to approach the problem. At the time, they, and other researchers in the field, were using a version of adiabatic quantum computing where conditions change continuously. They dug up information in the applied mathematics literature that inspired them to consider an older discontinuous approach where the changes are chopped into small discrete steps that each represent a gradual change—kind of like the individual frames of a movie.

“Very surprisingly, we found that this kind of discrete version is the correct version, or it is a more suitable version for us to design the quantum algorithm,” An says.

In a paper published in the journal PRX Quantum, An, along with colleagues, described the new algorithm they built. With the improved approach, they not only surpassed the speed of all previous quantum algorithms for solving linear systems of equations but reached the theoretically predicted limit of what any quantum algorithm can achieve. An says his background in applied math helped him understand and think about the problem from that overlooked angle.

Now at QuICS, An is working on applying quantum computers to solve even more types of equations and is diving further into quantum computing by engaging with other members of QuICS and creating new collaborations.

“I still consider myself a newbie in quantum computing fields,” An says. “I'm still learning a lot of stuff and trying to extend the boundary of myself. So I'm still very excited to see what I can do. I feel like QuICS is a really good place because there are many people working on different topics and from different directions.”